OASIS and ETSI have developed Application Programming Interfaces (API) for the generation, validation and long-term preservation of signatures, seals, time-stamps and evidence records, which provide the foundation for the development of a comprehensive “eIDAS-API”.

The eIDAS-Regulation, which has been fully applicable since July 2016, opened numerous new possibilities for the trustworthy digitalization of business processes in industry and administration. To put these opportunities into practice, the standardisation committees OASIS DSS-X and ETSI ESI have developed standards for the generation, validation, and long-term preservation of signatures, seals, time-stamps and evidence records. This blog post provides a compact overview of the recently created APIs and provides an outlook on possible future developments.

Regulation (EU) No 910/2014 of the European Parliament and the Council of 23 July 2014 on electronic identification and trust services for electronic transactions in the internal market and repealing Directive 1999/93/EC, which is commonly known as the “eIDAS Regulation”, aims at increasing the trust and efficiency of electronic transactions in Europe. This regulation has added numerous new trust services and aspects of electronic identification (eID) to the existing European framework for electronic signatures and time-stamps. In addition to the remote signature mentioned in recital (52), services for the validation and long-term preservation of signatures and seals have been included in Articles 33, 34 and 40 of the eIDAS-Regulation. In order to facilitate the practical use of these new trust services in an interoperable way and to provide a solid foundation for a prosperous and sustainable eIDAS-Ecosystem, the standardization committees responsible for electronic signature technologies at OASIS (Digital Signature Services eXtended, DSS-X) and ETSI (Electronic Signatures and Infrastructures, ESI) have recently adopted API-standards for for the creation, validation, and long-term preservation of signatures, seals, timestamps and evidence records.

As depicted in the figure below, the new API-standards provide programming interfaces for key services within the eIDAS-Ecosystem. Signatures and seals can be created via the Signature Generation & Sealing Service (SigS), verified via the Validation Service (ValS) and finally preserved for long periods of time with the Preservation Service (PresS). The application systems use the web service-based APIs developed by ETSI ESI and OASIS DSS-X. While the interfaces for the creation (ETSI TS 119 432) and validation of electronic signatures and seals (ETSI TS 119 442) are based upon the new version 2.0 des OASIS DSS-X Core, only the basic schema files created by OASIS (“Base” and “Metadata”) have been imported and extended for the definition of the interface of the Preservation Service (ETSI TS 119 512). In addition to the technical interface specifications considered in more detailed below, ETSI TS 119 431 (part 1 and part 2), ETSI TS 119 441 and ETSI TS 119 511 specify corresponding policy and security requirements, which form the basis for the conformity assessment of related (qualified) trust services in accordance with the eIDAS-Regulation. 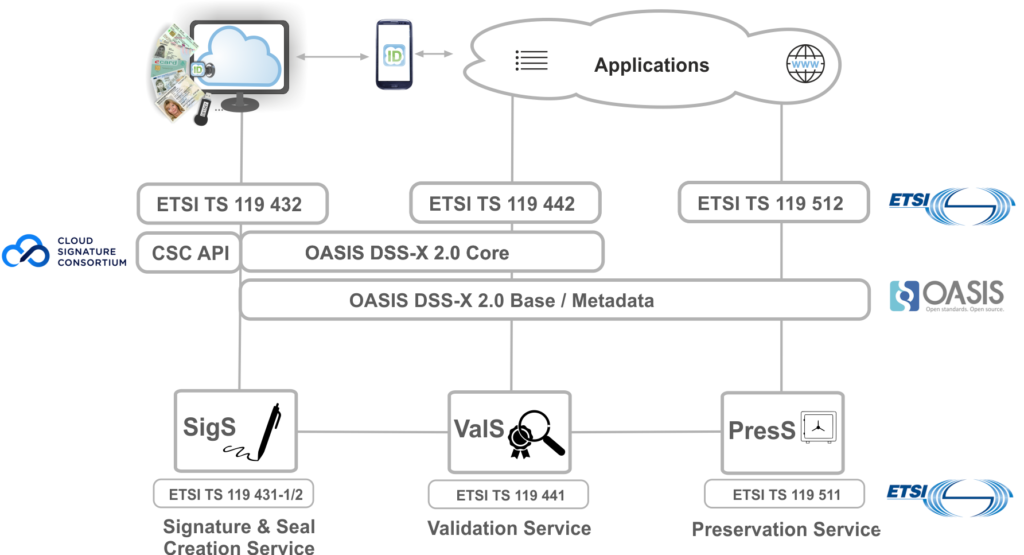 Figure 1: The new signature APIs at a glance

As part of a Technical Committee (TC), specialising in “signature services”, a “Core” specification was created by the international standardization organization OASIS in 2007. This standard defines the basic functionality for the creation (SignRequest /-Response) and validation (VerifyRequest /-Response) of CMS- and XMLDSig-compliant signatures. Due to the wide range of requirements from the various application areas of signatures and time-stamps, the core specification has been extended by a series of so-called “profiles”, e.g. for use with code signing, entity seals or processing XAdES- and CAdES-compliant artifacts. In the following years further profiles were developed, e.g. for detailed signature verification reports and for signature creation devices not located within the server instance.

Based on this previous work, the challenges of a new “API-Ecosystem” were addressed in the OASIS Digital Signature Services eXtended (DSS-X) TC with version 2.0 of the Core, which also seperates the semantics of the interface from the concrete implementation using a specific syntax. In addition to the XML syntax adopted from version 1, JSON, which is often used in modern web applications, is now also supported. Additional syntaxes could be defined, if required. For example, an ASN.1 based syntax would be conceivable to enable a particularly compact format for mobile and embedded applications with the “Packed Encoding Rules” (PER). To ensure the highest possible visibility and acceptance of the standard, the DSS-X Technical Committee, in collaboration with the OASIS Infrastructure team, has started to provide the interface on the „SwaggerHub“ collaboration platform. For this purpose, the JSON schema is extended by a series of meta-information to comply with the OpenAPI specification.

The profiles, recently created by ETSI and currently at OASIS, enable the specific characteristics of the AdES signature formats in combination with local and remote eIDAS-compliant signature createn devices via the DSS-X interface. The additional attributes of the signatures (e.g., the embedded certificate status information, time-stamps or evidence records) allow a wide applicability of this format. Since the initial standardisation, the associated interface extensions for the XAdES and CAdES formats are defined by the “AdES-Profile”. As part of version 2.0, the AdES-Profile is currently updated to support the latest developments related to the AdES formats. In particular, the PAdES format based on the PDF specification is also supported in accordance with ETSI EN 319 142-1. With this PAdES format multiple signatures in a workflow and the visual representation of an electronic signature in a PDF document can be realised.

For use within the eIDAS environment, the support of so-called “policies” by the DSS-X specification proves to be valuable. This allows the caller to submit a “policy” to the service, required for the desired action. The addressed server instance decides whether it can meet the required quality level or whether the request must be rejected. If the request is processed, the applied “policy” can be transferred to the caller within the response structure. This ensures that a consensus has been reached on the minimum quality level to be applied.

ETSI TS 119 432 based on version 2.0 of the OASIS DSS-X Core or in case of JSON also on the preparatory work of the Adobe-led “Cloud Signature Consortium” specifies interfaces for the remote signatures enabled by the eIDAS-Regulation. Here, in accordance with the standard EN 419 241 (part 1 and part 2) developed by CEN, a differentiation is made between the “Server Signing Application” (SSA) and the “Signature Creation Application” (SCA), each offering corresponding web service interfaces. The SSA contains an HSM-based “Signature Activation Module” (SAM) that triggers, after strong authentication of the signer in the “Signature Activation Protocol” (SAP) using the “Signer Interaction Component”, the creation of a raw digital signature in a low-level format, such as RSA according to PKCS # 1 or ECDSA for example. On the other hand, SCA ensures the preparation of the extended AdES signature format according to ETSI EN 319 122 (CAdES), ETSI EN 319 132 (XAdES) or ETSI EN 319 142 (PAdES). 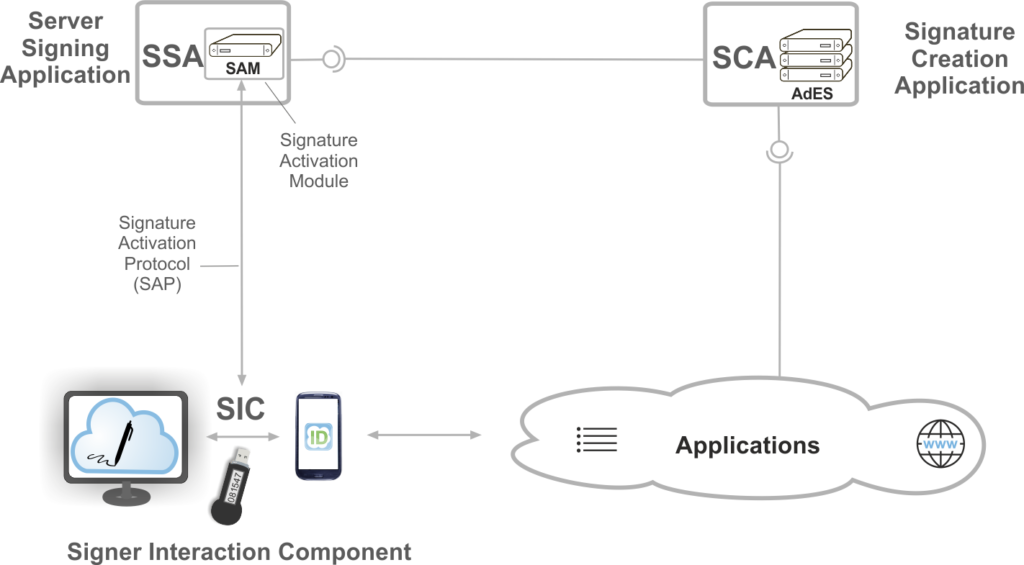 ETSI TS 119 442 defines three different programming interfaces, one for each type of service offering signature validation (validation via VerifyRequest / VerifyResponse), signature augmentation (augmentation via AugmentRequest / AugmentResponse), or offering both services combined. The first version of this document deals with the validation and enhancement of AdES signatures that comply with the current ETSI standards, such as: ETSI EN 319 122 (CAdES), ETSI EN 319 132 (XAdES) and ETSI EN 319 142 (PAdES) and the previous AdES specifications. Especially relevant are in particular the “Baseline Profiles” ETSI TS 103 171, ETSI TS 103 172 and ETSI TS 103 173 mentioned in the “Commission Implementing Decision” (EU) 2015/1506 and the underlying AdES specifications ETSI TS 101 733, ETSI TS 102 778 and ETSI TS 101 903.

Future versions of this document may also cover the validation of time-stamps, evidence records, or signatures in ASiC containers.

Similar to version 2.0 of the OASIS DSS-X Core, each element of the programming interface is first described generally before characterising corresponding syntaxes for XML and JSON.

If a document contains more than one signature, the APIs allow to select a specific subset of these signatures for validation and / or extension. In addition, it can also be specified in a request how many details should be returned in the response. This can range from a very simple response up to a comprehensive and signed signature valication report according to ETSI TS 119 102-2, as required in Article 33 (1) lit. b) of the eIDAS-Regulation.

The Preservation Profiles may on the other hand pursue the following objectives:

Depending on the storage model (WST, WTS, WOS), the various operations must (M) or may optionally (O) be converted by a Preservation Service according to ETSI TS 119 512, as shown below:

Table: Operations of the Preservation-API

Similar to the other API specifications, ETSI TS 119 512 first specifies the general semantics of an operation, before it specifies the concrete syntax for XML and JSON.

Based on the programming interfaces developed by OASIS and ETSI, it is only a comparatively small step towards a comprehensive “eIDAS-API”, by which all services of the eIDAS-Ecosystem can be addressed via common, web service interface based on XML / SOAP or JSON / REST. For this purpose, only an appropriate authentication and authorization mechanism must be provided for the respective technology characteristics. While mechanisms based on Web Service Security are the obvious choice for SOAP, the use of OAuth according to RFC 6749 or, more generally, the use of HTTP/1.1 based authentication mechanisms according RFC 7235 is a natural choice for REST.

The “eIDAS-API” may not only include the functions described here for the generation, validation and preservation of signatures, seals, time-stamps and evidence records, but may also integrate the other services of the eIDAS-Ecosystem in an appropriate way. This may not only include the electronic identification (eID) and the efficient enrolment for (qualified) certificates based on this, but also the trustworthy transmission and registered electronic delivery of documents and emails, for example. In order to enable the seamless and simultaneous use of smartcards and HSM-based signature creation devices, one may use the “Local and Remote Signature Profile”, which has recently been outlined and which is currently standardised in OASIS DSS-X. First steps towards the practical implementation of the envisioned “eIDAS-API” have recently been taken with the launch of the FutureTrust pilots portal and the constitution of the go.eIDAS Working Group “API-Interoperability”. Join us there to make the dream of an interoperable eIDAS-Ecosystem come true!

[1] This function assumes that the used container format supports versioning.